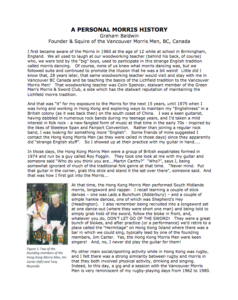 Founder & Squire of the Vancouver Morris Men, B. C. Canada

I first became aware of the Morris in 1960 at the age of 12 while at school in Birmingham, England. We all used to laugh at our woodworking teacher (behind his back, of course) who, we were told by the “big” boys, used to participate in this strange English tradition called morris dancing. Of course, none of us knew what morris dancing was, but we followed suite and continued to promote the illusion that he was a bit weird! Little did I know that, 28 years later, that same woodworking teacher would visit and stay with me in Vancouver BC Canada and be teaching the basics of the Lichfield tradition to the Vancouver Morris Men! That woodworking teacher was Colin Spencer, stalwart member of the Green Man’s Morris & Sword Club, a side which has the stalwart reputation of maintaining the Lichfield morris tradition.   READ MORE